The debut release of My Only Desire Records is this unreleased session from trumpeter Harry Beckett, originally recorded in 1974 for the BBC Radio 2 show Jazz Club.  It presents a wonderful snapshot of music from the era, as he mixes turbo-charged jazz with his Caribbean heritage and the rock and funk of the 70s.

His group includes the twin saxophone line-up of Alan Wakeman on tenor and soprano and Don Weller on tenor saxophone, Brian Miller on electric piano, Paul Hart on electric bass, John Webb on drums and Robin Jones on percussion.

All of the three songs presented on the session were composed by Harry, with two of them appearing on his classic 1975 LP ‘Joy Unlimited’ (Cadillac Records), albeit here in radically different forms, as the guitar of Ray Russell is replaced by the horns of Wakeman and Weller. “Bracelets of Sound” is transformed into an epic 14 minute masterpiece, complete with spine-tingling opening, beautifully composed themes and proto-hip hop drumming from John Webb, which will have producers around the world reaching for their MPC60s.

“No Time for Hello” with its instantly recognisable theme, is lent extra muscle by the horns. The double-quick bass playing, spaced out keys and bongo-heavy percussion make it an unlikely radio hit in the making.

The real find though, is the title track “Still Happy”, which has not appeared on any of Harry’s albums and until now has never been released in any format. It reflects Harry’s personality and joy of music making perfectly, which is apparent if you listen to any of Harry’s excellent albums from the mid-70s. The playing and interplay between the musicians is first-class, as it is throughout the session. 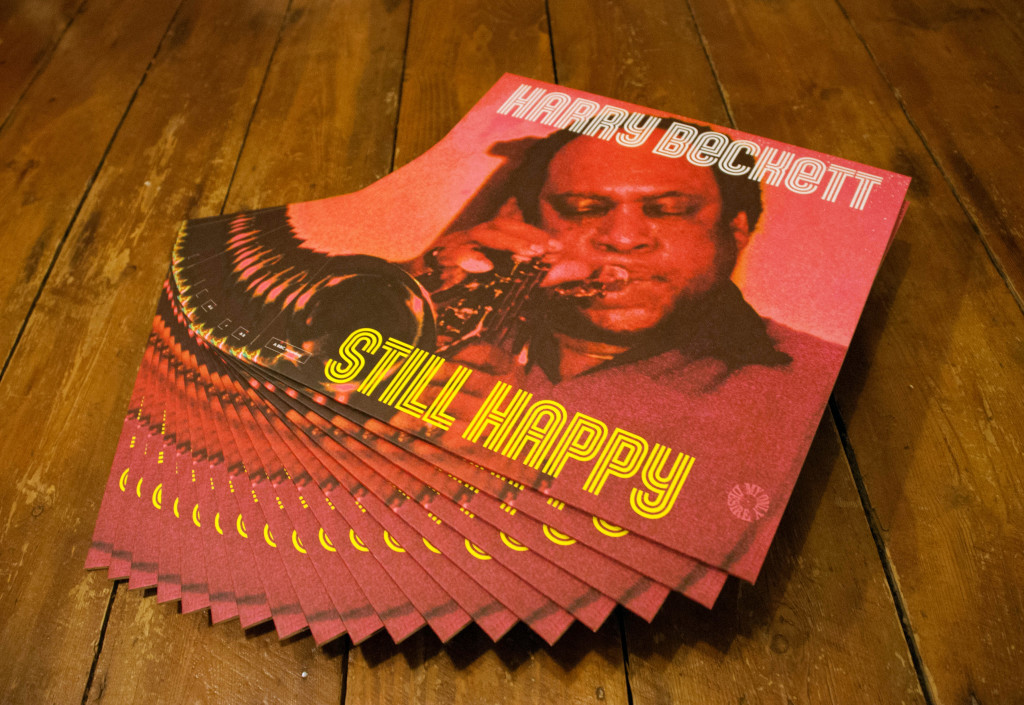 As Daniel Spicer explains in his fascinating sleeve notes for ‘Still Happy’: “Beckett’s solo, which comes hurtling out of the opening head, offers as good a summation of his musical personality as you’re likely to find: impossibly hip, irrepressibly swinging and bursting with joy.”

Harry had moved to the UK from Barbados in the 50s and played with a who’s-who of British jazz stars during the 60s and 70s – Graham Collier, John Surman, Mike Osbourne, Stan Tracey, Mike Westbrook, Chris McGregor etc. – as well as rock/pop stars such as Jack Bruce, Keef Hartley, Robert Wyatt and Manfred Mann. He recorded his debut album as a leader on Phillips, 1970’s ‘Flare Up’ and went on to record for labels such as Phillips, RCA and Ogun. Beckett worked in jazz for over five decades but also performed with pop/rock groups (Working Week, David Sylvian) and dub/reggae producers, such as Jah Wobble and Adrian Sherwood. Harry died on 22 July 2010 after suffering a stroke.

‘Still Happy’ celebrates Harry’s memory and should introduce him to many new fans.