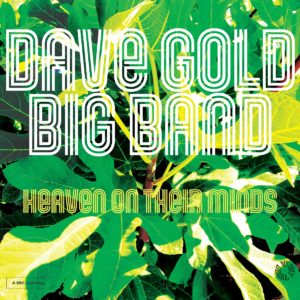 My Only Desire Records, MOD002

The second release by My Only Desire Records are four previously unreleased tracks of funky big band jazz, from a group led by composer/arranger Dave Gold, who recorded extensively for cult library labels KPM and Bruton Music.

Recorded in 1974 for the BBC Radio 2 show Jazz Club, Gold blows the cobwebs off the classic big band sound, updating it with electric piano and bass and mixing it with rock, funk and a large dose of humour. His band includes saxophonist Ronnie Ross, trombonist Chris Pyne and Dankworth Big Band drummer Harold Fisher, plus many stalwarts of the library music scene, including bassist Les Hurdle and pianist Cliff Hall.

Remastered by Frank Merritt @ The Carvery, this is a limited edition, one-off pressing of 500 copies on heavyweight vinyl. The sleeve is printed on thick, reverse board with extensive sleeve notes by Daniel Spicer (Jazzwise, The Wire). The runtime of 26 minutes has enabled the pressing to be loud and wonderfully detailed. Download code included.

The music includes the title track, a glorious arrangement of a song from Andrew Lloyd Webber’s Jesus Christ Superstar, which perfectly fuses jazz-rock with a sophisticated big band sound. Plus a cover of Jimmy Webb’s “Pocketful of Keys”, which strips back the US singer-songwriter’s original song revealing an infectious theme, complete with fantastic flute soloing. The two originals from Gold are “O’Connell Street”, a funky jaunt around mid-70s Dublin, whilst “Nostalgia (Ain’t What it Used to Be)” suddenly flips on its head, moving from schmaltzy late night jazz to jazz-funk courtesy of some killer drum breaks.

David Gold, born Weston-Super-Mare, February 3rd, 1942, is a composer, arranger, musical director and bandleader.  The son of the Dixieland jazz saxophonist and bandleader Harry Gold, Dave is most famous for his jazz library compositions. Contributing tracks to eight albums on KPM Music’s cult “1000” series of library music, between 1968 and 1977 and a further thirteen LPs on the equally popular Bruton Music library label, from 1979 until 1983. Leading to his work becoming highly collectible among library music aficionados, DJs and producers looking for rare breaks and fans of British jazz.

‘Heaven on their Minds’ will delight all of the above and should lead to a resurgence of interest in this hugely talented composer, arranger and band leader.

★★★★½ “This is an exciting, vibrant, big band playing some great charts and its appeal goes well beyond a nostalgic older generation.” – All About Jazz

★★★★ “Remastered in very high resolution. Although in mono this doesn’t detract from the superb quality of the music…This was an electric big band in every sense.” – Jazz Journal

★★★★ “Big band gold from a library great…Short’n’sweet, the pressing is punchier than an Inspector Jack Regan right hook.” – Record Collector

★★★★ “Highlights include two originals which kick and groove with an innate sense of distinctly ’70s British jazz style.” – Shindig!

“These loud, proud pieces of music have clearly been plucked from obscurity due to their outrageous danceability…An ebullient package for retro soul-funk instrumental junkies.” – The Arts Desk

“Just right summarises this whole LP…it feels good to lovingly caress a solid vinyl disc in a sleeve built to last and with a sound that filled every nook and cranny.” – Bebop Spoken Here