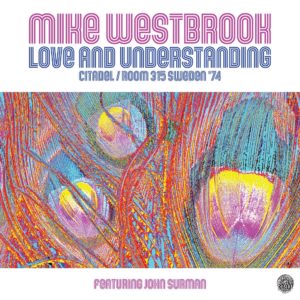 My Only Desire Records

The third release on My Only Desire Records is the debut performance of esteemed pianist/composer Mike Westbrook‘s cult 70s jazz masterpiece Citadel/Room 315, recorded live in 1974. Featured soloists throughout Love and Understanding are the iconic ECM recording artist John Surman plus a crack team of top Scandi jazzers.

The original RCA recording of Citadel/Room 315 is an hour-long suite of eleven tracks, beautifully composed and arranged by Mike Westbrook that is rightly considered to be one of the high-points of Brit-jazz from that era. Mike was commissioned by Sveriges (Swedish) Radio to write the work with Surman as lead soloist. He then travelled to Sweden to perform and conduct it for the first time, live in concert. This recording has never been released until now and presents a wildly different recording to the later LP, the rawness and freedom of the playing contrasting strongly with the more polished studio album.

Backed by the 16-piece Swedish Radio Jazz Group led by saxophonist Arne Domnérus and Argentinian trumpeter Americo Bellotto, the group comprised the finest players on the Swedish scene, including trumpeters Jan Allan and Bertil Lövgren, guitarist Rune Gustafsson, pianist Bengt Hallberg and drummer Egil Johansen. Between them they had worked with everyone from George Russell and Stan Getz, to Monica Zetterlund and Jan Johansson.

Composed and arranged by Mike Westbrook

“For this jaw-dropping 1974 recording, Westbrook drew on the range and daring of a phenomenally on-form John Surman and his own marriage to vocalist Kate Westbrook to craft a dizzying, wide-ranging suite.” – ★★★★★ MOJO

“Gratitude to My Only Desire Records for releasing this recording. High praise on their third release and compliments to the wonderful sleeve notes by The Wire writer Daniel Spicer and for Caspar Sutton-Jones’ remastering work at Gearbox Records, which from the original analogue tapes have given us a treasured thing indeed and a must for any record collection.” – ★★★★★ UK Vibe

“Both as a wildly different take on a much-loved original and as compelling proof of the saxophonist’s greatness, it’s scintillating stuff.” – ★★★★ Record Collector

“So it’s all there: new but familiar, raw yet sophisticated: angry, joyous and swoonsome all at once. But then, that’s the story of, that’s the glory of, love. As a side note, there’s a beautifully-pressed and superb-sounding double LP version of the CD, which vinyl freaks are highly recommended to seek out.” – ★★★★ Jazzwise

“Hearing it for the first time in 46 years, I was delighted to find it every bit as exceptional as I’d thought back then.” – Richard Williams, The Blue Moment

“This Swedish version manages to be simultaneously lighter on its feet and instinctively funkier than the British remake… Citadel/Room 315 is a distillation of everything that was great about jazz in the 1970s.” – The Wire

“Captures a snapshot of a younger Westbrook, coupled with an exuberant big band. An exciting record, it marks an early foray into big band composing and arranging, and indicates the direction he would follow in later years.” – LondonJazzNews

“It’s a welcome release that stars Mike Westbrook and John Surman who are two titans of British jazz at the peak of their considerable creative powers…a must-have for anyone who is interested in jazz, and especially British jazz.” – Dereksmusicblog